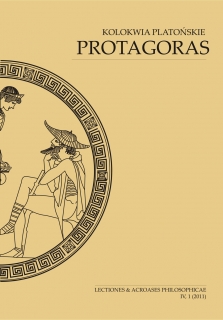 Plato's Protagoras: composition, the contest of logoi and the Socratis parody

Protagoras belongs to one of Plato’s most commonly staged dialogues of Plato. Ancient Greeks characterized it as agonistic competitive and endeictic, i.e., merely hinting at, but not offering the final settlement of the dispute in question. In the dialogue, we face an incredible controversy agon between Socrates and Protagoras. While the controversy concerns the value of the Sophist’s teaching of civil virtue for money, it is combined with numerous other themes and tensions which culminate in the philosopher’s ensnaring of his interlocutor. Thus, the dialogue is characterized by its dramatic composition with a double prologue, four agons controversies, a humorous interlude, an ingenious anagnorismos and an epilogue which concludes with a perplexing reversal of Protagoras’ and Socrates’ positions. At the end, there are several remarks about possible interpretations of this and other dialogues of Plato.