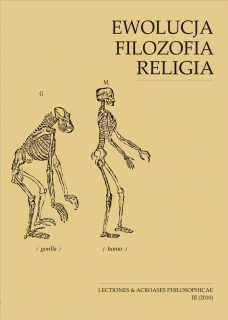 Evolution or creation? The problem of creation of world in thought of 2nd century apologetes

In this article the author tries to paint an outline of the idea of creation, as it is presented by the 2nd century Apologetes. The dependence of the existence of the universe on a transcendent God is central for Christian thinking. The author is aware that in the light of the longstanding and complex conflict between two extreme ideas in the history of human thought, namely evolution and creation, and the overall domination of nature science, this message may not receive proper acceptance. This, however, was not the purpose of formulating it. The basic intention of the author is to bring close to the present-day reader the sources and methods employed to develop the concept of creatio ex nihilo in the primary phase of its formulation – a concept which is often denied or stigmatized as unscholarly. It is difficult, when studying the writings of the 2nd century Apologetes, to avoid the impression that their intention was to create a compact and comprehensive theologico-philosophical system, This system was to be an exposition of basic Christian truths, and later – after the falldown of Greek power and the weakening of the role of Rome as a sponsor of philosophical schools – to form the substructure for a culture of thought. The attempts of these Christian thinkers to present the relationship between God and creation were supposed not only to stop a process of decline, but also, and more important, they should lead to deeper philosophical reflection.
The following article is supposed to show that the relationship between God, the world and man, according to the teaching of the Apologetes, has its beginning and finds its fullest explanation in the omnipotence, wisdom and goodness of the transcendent, personal God, who is the First Cause and the principle of the existence of man and the world. This God, the Apologetes add, has spoken out through his Word-Logos, whom they occasionally compared to the Platonian demiurg.