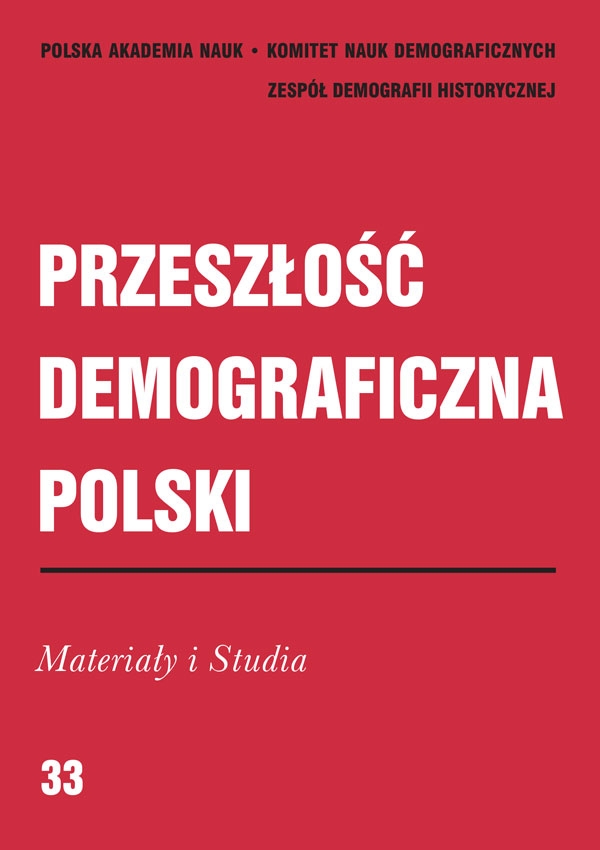 Marriages in the Greek Catholic parish of Kalush in 1785–1897

Kalush lies at the foot of the Carpathians, in the Dniester River basin, about 100 km south-east of Lviv. When it belonged to the Kingdom of Poland, it was the centre of a local royal estate; after the area was seized by Austria in 1772 it became a district town. For centuries the area was associated with salt mining, processing and trade. The town had a complex population structure comprising Poles, Ukrainians, Jews and Germans, and, in terms of religious denominations — Roman and Greek Catholics, Protestants Lutherans and Mosaic believers.
The present analysis is based on the birth, marriage and death registers of the Greek Catholic parish of Kalush from 1785–1897. The monthly seasonality of weddings in the parish depended largely on the church calendar and work in the fields. Most marriage ceremonies in this religious group took place in October, November and January. Usually, they were held on Tuesdays, Mondays and Thursdays. In most cases marriage ceremonies were witnessed by two men, usually people of higher standing or popularity in the local community. The average age of the groom was 28,7 years and of the bride 23,5 years. The age of both men and women was much lower when they were getting married for the first time. The bachelors were on average 25,4 years old at that time and the maidens — 21 years.
Approximately 10% of marriages were between people of different denominations. Usually, they were marriages between Greek Catholics and Roman Catholics. As the town developed and grew, it attracted a number of people seeking work and a better life. This process can also be observed in the birth, marriage and death registers. 29% of men getting married in Kalush were born outside this parish, while 13% lived permanently outside the town, usually in its vicinity. Despite the custom of conducting the marriage ceremony in the bride’s parish, marriage registers also contain information about women born outside Kalush and Bania but living there permanently. Approximately 10% of the women came from outside the town.