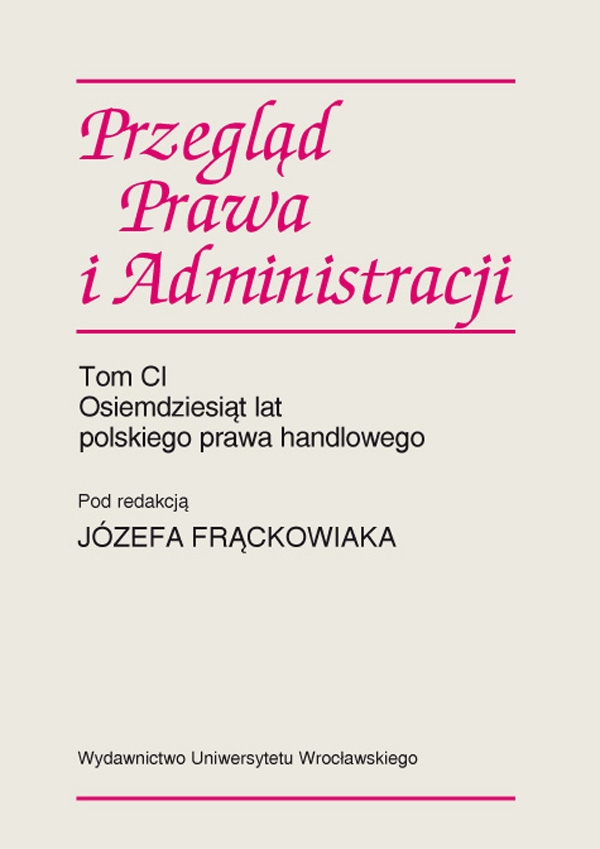 KEY CONSTRUCTS AND CONCEPTS OF THE COMMERCIAL CODE OF 1934

The Polish Commercial Code, which came into force on 1 July 1934 and in fact ceased to be binding on 1 June 1965, was prepared by the Codifying Commission, established by the Act of 3 June 1919. It is a significant codification achievement in the twentieth century in Poland. With the entry into force of the Civil Code of 23 April 1964, the Commercial Code was repealed, while most of its provisions were maintained, and namely those relating to general partnerships, limited liability companies and joint stock companies, but not limited partnerships, together with the introductory provisions concerning: the business name, commercial power of attorney and the commercial register. As far as foreign trade relations are concerned, the provisions of the right of retention and compensation were maintained in force. Also, the provisions of the Commercial Code relating to commercial activities did not disappear from Polish law, as they were maintained for the entire civil circulation or just its part, such as foreign trade, or they were included, usually in a modified form, in the Civil Code. In principle, however, the Commercial Code became a normative act concerning exclusively commercial companies. This situation lasted until the entry into force of the Commercial Companies Code of 15 September 2000.
Like the German Handelsgesetzbuch of 1897, also the Polish Commercial Code, treated as lex specialis in relation to the Civil Code, included only substantive commercial law, but not in its entirety. The Commercial Code did not include cooperative law, banking law, stock exchange law, bankruptcy and composition law and commercial judiciary, as well as some specific matters that were applied not only in the trade but also in the civil circulation.
As the author of the Polish Commercial Code argues, the Code was a major step forward in the global legislation in defining the concept of a merchant, because the condition it adopted here was in principle the mere fact of running a commercial enterprise of any type, any size and in any way. A commercial enterprise constituted the basic construct of the Commercial Code, on which depended understanding of all other institutions of commercial law. Polish codifiers adopted a position that it was necessary to use a very broad concept of a merchant, that would allow for other persons who have not been previously qualified as merchants, to be now qualified as such. It was the mere fact of carrying out a commercial activity, and not other activities that determine whether a person is a merchant or not. In this way, the term “merchant” moves closer to the term “entrepreneur.”