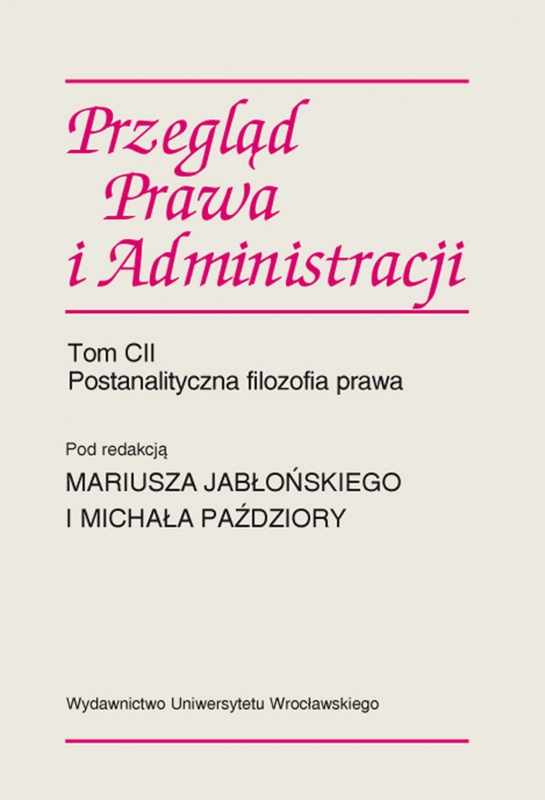 In this article Paul Ricoeur’s output is taken as a reference point for the changes taking place in the paradigm of the philosophy of law. At the same time, an example of the use of the philosopher’s views in the postanalytic philosophy of law is the theory of interpretation of the legal text and the legal entity the recipient of the legal text presented in this paper. The so-called “linguistic turn,” taking place in the 1960s, consisting in the transition from existential philosophy to hermeneutics, understood as a method of the interpretation of the text, is considered a key moment in the evolution of Paul Ricoeur’s views. From the perspective of this essay, it is more important to consider further changes in the philosopher’s views which had their source in the critique of the concepts that dominated the studies of the text of that time, both in the mainstream of hermeneutics and in analytic philosophy. At that stage Ricoeur referred to both H.-G. Gadamer’s work as well as to the work of the representatives of the philosophy of language, such as G.H. von Wright, J.L. Austin and J. Searle. Ricoeur stated at the same time that the prospect of the analytic philosophy unduly restricts the issue of the subjectivity of a text interpreter. Ricoeur has ultimately developed, on the ground of narrative paradigm taken from the theory of literature, going beyond hermeneutics and the philosophy of language, a uniform theory of the interpretation of literary texts and human action, which is at the same time the onto-ethics of the interpreting entity the-one-who-is-himself. According to the first thesis of the article, the development of Ricoeur’s views anticipated the direction of the changes taking place in the philosophy of law, resulting in the criticism of the analytic paradigm. One of the reasons for such criticism has been a restriction of the cognitive perspective, leading to the marginalization of the research on the dialectics of the legal text and its interpreter. According to the second thesis of the article, the narrative paradigm that refers to Ricoeur’s achievements, meets some current needs of the postanalytic philosophy of law, thus forming the basis for a unified theory of the interpretation of the legal text and the acting subject of law.