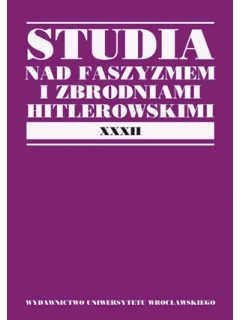 THE LEADER AND HIS FOLLOWERS. THE BEGINNINGS OF ADOLPH HITLER’S POWER AND AUTHORITY AMONG NATIONAL SOCIALISTS

The subject of this article is a process of emergence of Hitler’s leadership position in the Nazi organization since his joining the miniature Deutsche Arbeiterpartei DAP, which was NSDAP predecessor, in September of 1919 until the failed attempt by National Socialists to overthrow legitimate German government at the beginning of November 1923 Munich Putsch. From the beginning of his political activity after World War One, Hitler determinedly and doggedly tried to achieve a commanding status. The fecklessness of DAP leaders was one of the main reasons why Hitler decided to join this party. He pretty soon recognized that the lack of leadership qualities among DAP co-creators – Karl Harrer and Anton Drexler – could be seen as an opportunity for him to realize his political ambitions and aspirations. The management of DAP was not willing, however, to become subject to Hitler, though his propaganda capabilities were widely appreciated. Only after two years had passed, the future Führer managed – as a result of „palace revolution” in August of 1921 – to reach a position of the first chairman of the party which changed its name to NSDAP in 1920. Since then, Hitler consistently strengthened his position in the party, surrounding himself with activists who favored his leadership aims and who, mostly thanks to the efficient use of propaganda mechanisms, started to create a cult with Adolph Hitler as a central figure. Dietrich Eckhart, Herman Esser and Alfred Rosenberg particularly contributed to Hitler’s perception, power and authority in the Nazi movement in the early twenties. Hitler himself also attempted to create an impression of the Providential Man. With this purpose in mind, he was using his good enough knowledge and understanding of political psychology. Even before Munich Putsch, he was known as a talented orator and organizer. He employed different methods in order to increase the party membership and enhance NSDAP influence in the Nationalist movement. After the failure of the putsch in Bavaria’s capital city, Hitler temporarily lost – while remaining in prison – his position as the Nazi leader but regained it quite soon at the beginning of 1925 when he was again appointed the chairman of NSDAP. Since that time his power and authority among National Socialists were systematically on the rise. Not long before taking up the post of Reich Chancellor 30 January 1933 he was universally respected, idolized and almost worshipped by the Nazis and many other Nationalists. At that time he already doubtlessly achieved a status of charismatic leader-position and image he was even more vigorously trying to cultivate after 1933.