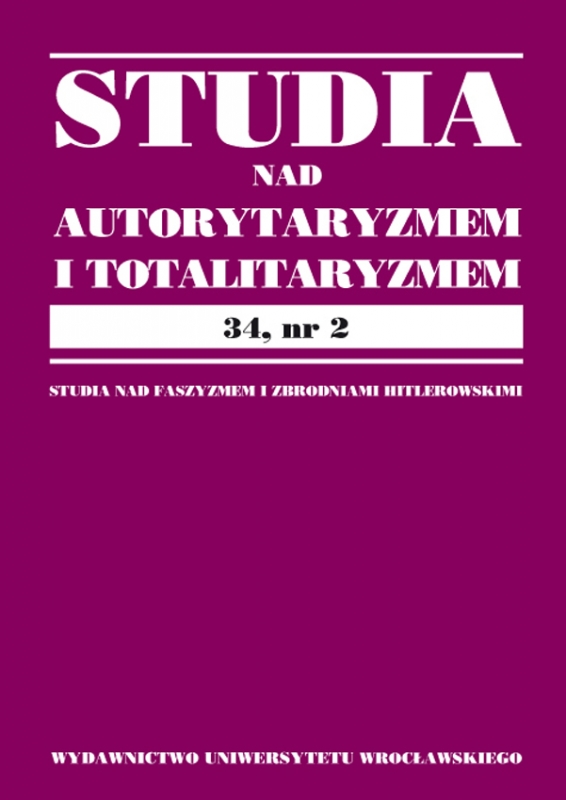 Simon Wiesenthal does not belong to the circle of intellectuals or professional researchers of the age of the Nazi or the totalitarian period. However, this amateur’s reflections must not be ignored in a debate devoted to these issues. It is due to the fact that as a witness to history and a documentalist of the Second World War, as well as an observer of the events in the post-war period, he brings valuable input in the scholarly view of Nazism and totalitarianism. Simon Wiesenthal is the founder of the Jewish Documentation Center in Vienna, Austria. The Center’s main aim was to collect evidence to prove the guilt of Nazi war criminals who committed various kinds of atrocities during the Second World War. In the post-war period, during the time of the so-called Cold War, the Center monitored the level of awareness of societies regarding the times of Nazism and totalitarianism. Simon Wiesenthal was born in 1908 in the city of Buchach in present-day Ukraine. He dreamed of acquiring the profession of an architect, but the Second World War foiled these plans. Owing much to luck, Wiesenthal survived the liquidation of the ghetto in Lvov. He was imprisoned in several camps. His last concentration camp was Konzentrationslager Mauthausen in Austria. It was there that on 5 May, 1945 half-dying Wiesenthal regained freedom. When gathering information about his countrymen who survived the war or were killed, he mainly began to analyze the atrocious Nazi regime. Seeking the perpetrators of the Nazi war crimes and studying the structure of lawlessness during the war became his main task. Wiesenthal did not limit the scope of the crimes of Nazism only to Jewish victims. He believed that the Nazi system in its very nature was criminal and it made no distinction between Jews, Russians, Poles or representatives of other nationalities. Hence, he attached great importance to eradication of the evil of Nazism by confronting its past in court. In his documentary work and publications, Simon Wiesenthal emphasizes that Nazism would not have emerged without a specific foundation. The system arose gradually, subtly, creating a specific structure, which was tightening like a noose. During the Second World War, crimes against humanity and peace as well as genocide became the apogee of Nazism. They were preceded by certain actions that bore signs of the emerging crime. When assessing each crime, Wiesenthal pays special attention to its content. Then, the content gives way to the scope. Anti-Semitism was a determinant of Nazism. Thus, during his whole life, Simon Wiesenthal was sensitive to all forms of anti-Semitism. Wherever such actions occured, whether in the form of slogans or anti-Semitic views, they provoked Wiesenthal to anger and anxiety that the totalitarian state or the totalitarian ideology would return. Lack of reaction to even minor anti-Semitic opinions or behavior may be a prelude to the apogee of the threat to democracy. Wiesental linked condemnation of the Nazi crimes with the faith in justice. In his reasoning, it is indeed the foundation of life. He linked justice with the law. Similarly as for the philosopher Hegel, for Wiesenthal the law was an objective phenomenon. He did not concentrate solely on the past but was an active observer of the development of the international situation in the post-war world, in Europe. During the Cold War and the Iron Curtain, Wisenthal saw threats to democracy and violation of human rights. He criticized the Sovietization of Central and Eastern Europe after the Second World War. He pointed to the lack of democracy in the dependent countries which came under the influence of the Soviet Union. He defined Stalinism as totalitarianism, comparing it with the Nazi totalitarianism. When accusing the Soviet Union of the lack of democracy, Wiesenthal pointed at specific examples of persecution of the people who disagreed with the existing system. He demonstrated his negative attitude towards communism in various ways. From beginning to end, Simon Wiesenthal was consistent in his view on totalitarianism. He negatively assessed all forms and manifestations of it. He held on to the view that totalitarianism always arises with the participation of particular individuals: the individuals who, by means of ideology, create or build a specific structure.