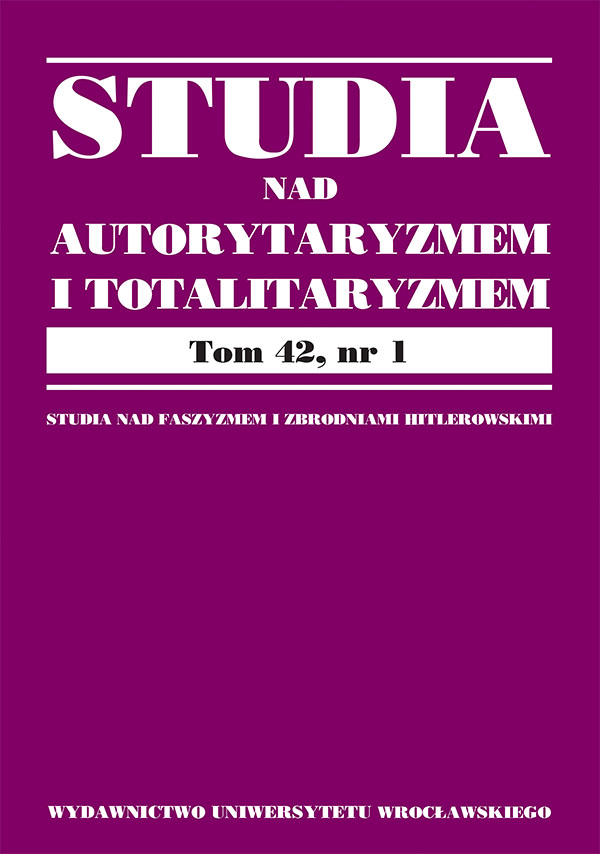 The article analyzes the sanitary and hygienic conditions of living and medical care at Konzentrationslager Stutthof — Aussenlager Pölitz — a branch of the Stutthof central camp. The sub-camp in Police was created with a view to supplying cheap labour to a synthetic gasoline fac-tory, which was a strategic plant of the German war economy. The health condition of prisoners in concentration camps always remained bad, but the health problems of the prisoners in Police resulted not only from terrible sanitary, hygienic, and living conditions, but also from the difficult working conditions in the factory. So far, the issues of interest to us have not found wider interest among researchers who focused on the so-called “Camps”, apart from the so-called small — affiliate camps. The following research questions were asked: How did medical care function in the German (Nazi) sub-camp Konzentrationslager Stutthof — Aussenlager Pölitz? What were the sanitary, living and hygienic conditions in the German (Nazi) sub-camp Konzentrationslager Stutthof — Aussen-lager Pölitz? In preparing this article the author used research methods characteristic for historical sciences, such as external and internal evaluation of sources; the dogmatic method, which seeks casual connections of a more complex nature than simple time-related connections, and comparative research. The analysis was based on archival materials of the Institute of National Remembrance, es-pecially the Archives of the Branch Office of the Commission For the Prosecution of Crimes Against The Polish Nation of the Institute of National Remembrance in Szczecin (primarily testimony re-ports and witness accounts, factual documentation), memories and literature of the subject (Polish, German, and English). Based on the source material and subject literature it was proved that: 1) The way the sub-camp in Pölitz operated depended on the requirements of the German arms industry. It was created to provide cheap labor for a synthetic fuel factory (Chemische Werke Hydropetroleum Industrie Gesellschaft), a strategic plant for the German war industry. 2) Prisoners of concentration camps were never in good health, but health problems of prisoners in Pölitz were caused not only by poor sanitation, hygiene, and living conditions, but also by harsh working conditions in the factory. 3) The health conditions developed by prisoners from the KL Stutthof — Aussenlager Pölitz could be divided into 4 groups: a) illnesses related to the living conditions in the camp, typical for most concentration camps, b) illnesses resulting from hunger and total exhaustion, c) injuries caused by beating, and d) illnesses resulting from workplace contamination. The operation of the Pölitz camp could be divided into two periods: one when the camp (at that time “the summer camp”) was still under construction, and the other — its actual operation — when the winter camp was established with extended camp infrastructure. However, regardless of the time, prisoners always suffered from hunger, exhausting work beyond their capabilities and various illnesses.