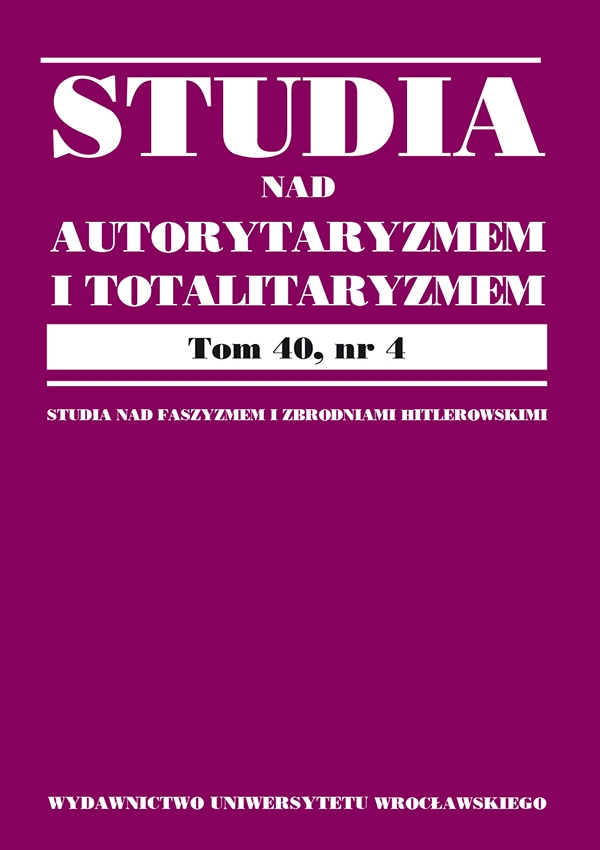 POLISH INTERPRETATIONS OF TOTALITARIANISM: ON SOME OF THE RESULTS OF THE WORKS CARRIED OUT AT THE WITOLD PILECKI CENTRE FOR RESEARCH ON TOTALITARIANISM

The theory and practice of totalitarianism, despite the passage of time since the collapse of the systems showing its features in Europe, still arouses intellectual curiosity. This subject matter is also particularly interesting from the Polish point of view, as the native reflection on the subject reaching back in the tradition of political and legal thought to the interwar period shows the richness of often innovative research findings made by several generations of scientists in Poland and abroad. The subject of their exploration concerns not only the constitutive assumptions of totalitarianism and its fascist, Nazi and communist systemic forms, but also the peculiar domestic experiences that accompanied the inhabitants of Polish lands during World War II and the Cold War. This unique historical situation, in which the Republic of Poland had been entangled, creatively provokes to discover, archive and popularize knowledge in this field. Thus, it obliges to perpetuate materially and mentally important and tragic Polish experiences. Numerous publications, showing above all the perspective of the Polish interpretation, also make it possible to confront the positions of Polish researchers with the scientific findings from other parts of the world, as well as to take part in the international discourse with full legitimacy. The abovementioned motives were undoubtedly the main reasons for the creation of the collective work Experiencing two totalitarianisms: Interpretations published this year by the Witold Pilecki Centre for Research on Totalitarianism. Apart from other publications on totalitarian systems analysis, which have been published in Poland in recent years, it is an important research contribution to a subject which is completely unknown mainly as a result of the practices of the People’s Republic of Poland, but which is necessary in order to consolidate and settle accounts with the difficult past. This work can also be considered scientifically attractive because of the interdisciplinary historical, political, philosophical-political, legal and literary approach to the subject matter intended by its authors and editors.