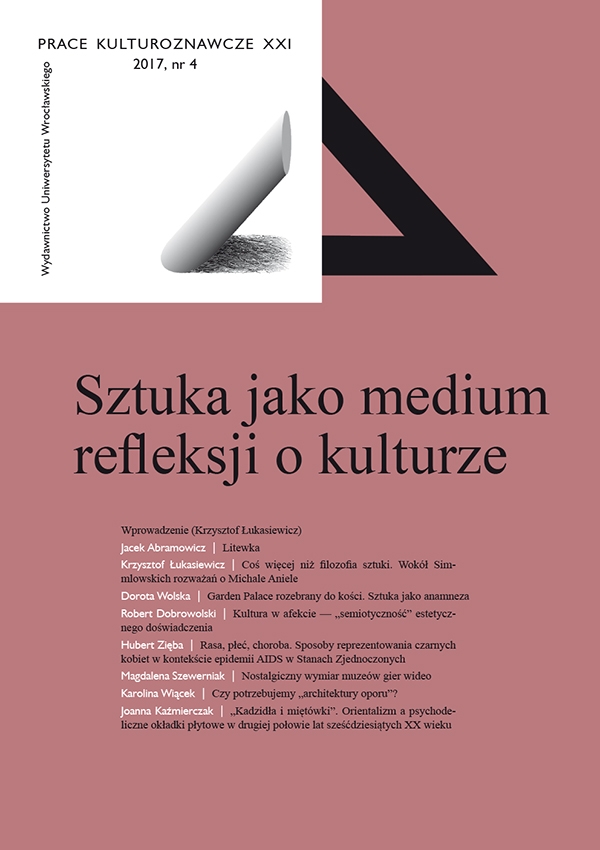 “Incense and peppermints”. Orientalism and psychedelic album covers in the second half of the 1960s

The article focuses on three intertwining subjects: 1 psychedelic culture of the 1960s, 2 orientalism in culture and 3 album cover art. Its most important goal is to support the process of inclusion to the discussion about the orientalist phenomenon in popular music in the 60s the problematics of the design of album covers, which had been rarely taken into consideration in such context up to this day. Secondly, regarding the fact that the narration on the reflection about the album cover art of that decade tends to focus almost entirely on the artworks related to very few musical groups — most importantly The Beatles — another aim of this article is to point to the wider range of artists, who experimented with orientalist motives both in their music and in their professional image. Psychedelia can be seen in such context as an artistic current which produced the most fertile and culturally most significant fusion between orientalism and popular music in the 1960s. As the examples of this process, the album covers of such artists as The Byrds, Curved Air, The Jimi Hendrix Experience, The Moody Blues, The Rolling Stones or The Strawberry Alarm Clock, et al., are being named. The formal and contextual analysis of the presented spectrum of album covers here narrowed down solely to American and British editions rests upon the definition of psychedelic art as an artistic action inspired by the aesthetic components of psychedelic experience, rather than occurring under the direct influence of a psychedelic drug.