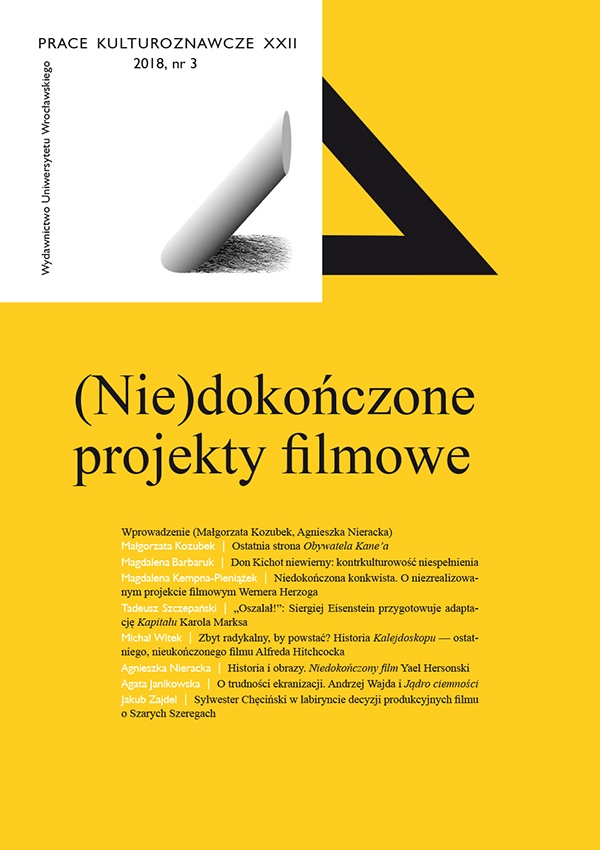 Too radical to be completed? The case of Kaleidoscope, the last, unfinished film of Alfred Hitchcock

Between 1964 and 1967, at the end of his illustrious career, Alfred Hitchcock experienced an extraordinary moment of creative renaissance. Inspired by the dynamism and innovativeness of European cinema, he decided to reach for the subject and creative means that were ahead of his time. Unfortunately, one of the potential masterpieces of contemporary cinema has been hailed too radical, shocking and even repulsive to be made. This article is an attempt to reconstruct the intricate fate of the Kaleidoscope, the last of the unfinished film projects of Alfred Hitchcock. The existing materials and available sources have been analyzed and systematized in order to find an answer to a number of research questions, and in the end to try to find an answer to the most important one: why a project so meticulously prepared, and in many ways visionary has become an “unfinished work”? Moreover, within the scope of attainable facts an attempt has been made to reconstruct the motivations and the main stylistic and narrative motifs of the film. The potential relations between this project and the director’s earlier works, Psycho 1960 as well as later Frenzy 1972, have also been examined.