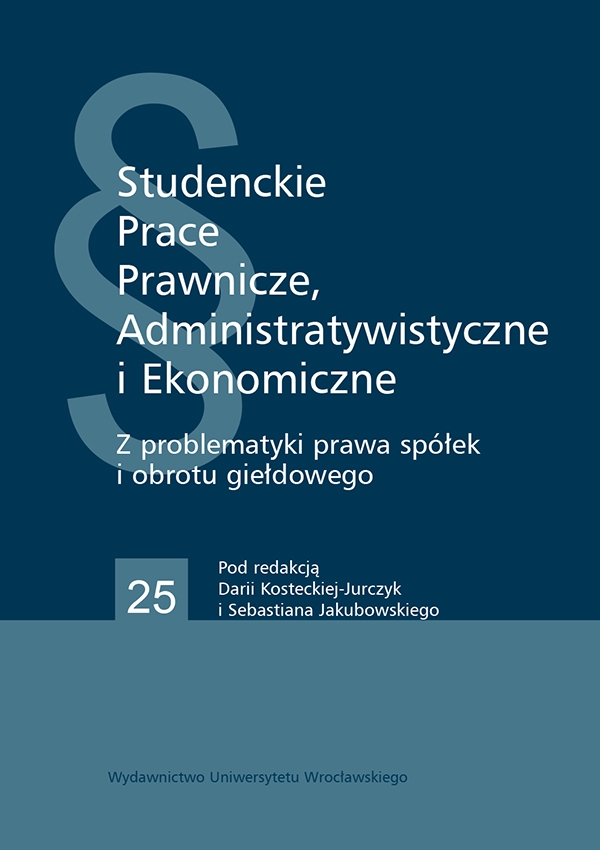 An already defunct institution? Old-Polish and Austrian pactum advitalitium in a contemporary perspective

Pactum advitalitium was an early Polish legal institution established through a marital agreement. It was a form of annuity by means of which spouses established a right of usufruct of the entirety of an estate, effective upon the passing of one spouse and existing for the lifetime of the beneficiary. The practical purpose thereof was to secure the material well-being of a widowed spouse, usually the wife, given not only that the legal system did not provide for commune marital property, as well as that there was no statutory spousal succession. Later, after the partitions of Commonwealth of Poland and Lithuania, the institution discussed herein was adopted by Austrian law and regulated in the newly enacted Austrian Civil Code ABGB, with slight modifications enabling i.a. to encumber not only the whole estate or a part thereof, but also several assets of a future estate. Thus advitalitium had become available within the vast Austrian Empire, yet it did not gain a wide recognition among the nations of the Monarchy, remaining an infrequently used institution, which led to its repeal in 21st century. The very legal character of pactum advitalitium was and is still controversial, leading the academia to suggest multiple explanations of its nature, often varying significantly dependent on the subject of advitalitium in a specific case the entirety of an estate or a part thereof or several assets. The authors aim to examine the origins and history of advitalitium regulation in early Polish and Austrian law in their historical context, later to recount the doctrinal concepts explaining its character. To pursue both there aims, historical and formal-dogmatic methods are employed. The authors then move on to discuss the possibility of reaching results identical or just similar to ones achieved by means of an advitalitium in modern Polish law, applying the formal-dogmatic method, to show that not only no comparable institution exists in Polish law nowadays but, moreover, that similar results cannot be achieved by applying instruments known to Polish law. Such analysis enables the authors to arrive at conclusions regarding the possible application of advitalitium as an instrument of estate planning in the context of modern family relationships, which could lead to the rediscovery thereof in modern legal systems.